The tambourines is a musical instrument in the percussion family consisting of a frame, often of wood or plastic, with pairs of small metal jingles, called “zils”. Classically the term tambourine denotes an instrument with a drumhead, though some variants may not have a head at all. Tambourines are often used with regular percussion sets. They can be mounted, for example on a stand as part of a drum kit (and played with drum sticks), or they can be held in the hands and played by tapping or hitting the instrument.

Tambourines come in many shapes with the most common being circular. It is found in many forms of music: Turkish folk music, Greek folk music, Italian folk music, classical music, Persian music, gospel music, pop music and rock music.

Tambourines originated in Rome, Greece, Mesopotamia, The Middle East, and India, in which the instrument was mainly used in religious contexts. The word tambourine finds its origins in French tambourin, which referred to a long narrow drum used in Provence, the word being a diminutive of tambour “drum,” altered by influence of Arabic tunbur “drum”. from the Middle Persian word tambūr “lute, drum”.

The tambourine can be held in the hand or mounted on a stand, and can be played in numerous ways, from stroking or shaking the jingles to striking it sharply with the hand or a stick or using the tambourine to strike the leg or hip.

The pin depicts the Tambourines 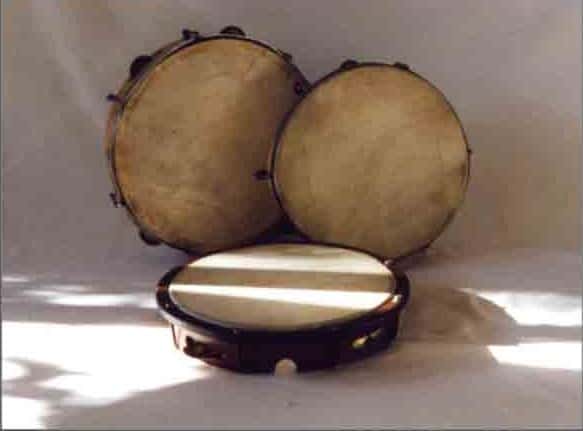